Honouring the humanity of people living with dementia through art.

On a recent fall morning, Québec artist John Ryan found himself mixing paint and directing the brushstrokes of a retired farmer from the southern part of the province. The farmer, who lives with dementia, was helping Ryan with his latest project – a mural intended to honour the resilience and talents of those with Alzheimer’s disease as well as celebrate the work of Alzheimer Societies in Quebec, who over the past 30 years, have been helping them and their caregivers live the best quality of life possible. But there was a problem: the farmer was telling stories of harvests and hardships, stories that resonated with Ryan, who grew up on a farm.

“We had to stop painting, so we could have a visit and talk,” says Ryan. “We had a lot in common.”

In fact, everywhere Ryan stopped during his recent tour of Québec’s 20 Alzheimer Societies, as part of a province-wide art project presented by the Federation of Quebec Alzheimer Societies, he found himself putting down the brush to chat. Dozens of people with dementia – some of whom are artists themselves – helped with his mural. The 18 x 7’ piece is collection of 20 canvases reflecting the special features of each Society’s respective region.

The mural’s creation was not meant as a form of art therapy, but it often felt therapeutic, says Ryan – for him as much as for those helping.

“Coming into this I had very little knowledge of what it’s like to live with this disease,” he says. “When you first hear about it, a chill goes down your back and you just don’t want to talk to that person because they have Alzheimer’s. You don’t know what to say.”

He learned what people living with dementia already know: overcoming stigma is crucial if we want to make a difference. A recent survey asking more than 1,200 Canadians affected by dementia to identify their research priorities showed stigma was their number one concern. The 2017 survey, part of the Canadian Dementia Priority Setting Partnership, was funded by the Alzheimer Society Research Program.

Ryan says he found it’s not that hard to talk to people with dementia. Just like with anybody, you find something in common.

He says one woman who helped him with his mural will always stick in his mind. She was having a hard time communicating but sang as she worked. Ryan told her that when he paints at home, he likes to listen to music and it was nice to hear her sing.

“She just beamed at me when I told her that,” he says. “You have these positive experiences no matter how severe the disease. There is a lot of person left. A lot of talent. A lot of good times. We just have to make the effort to be involved.”

Ryan’s mural was unveiled as part of Alzheimer’s Awareness Month on January 10 at Centre St-Pierre, Montréal. The public will have the opportunity to view the artwork along with other pieces by the artist throughout the month. 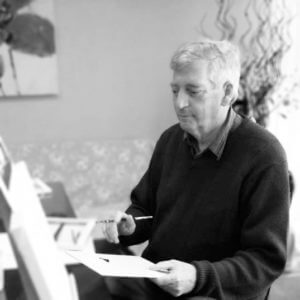