In 2016, our lives changed when my husband, Kenn, was diagnosed with Frontotemporal dementia (FTD).

Being married for 32 years, I knew something was wrong. Kenn could no longer hold a job. He had uncontrollable outbursts with employees and was terminated from three positions in three years. We have three grown children and I involved them early on in what was really happening in our home. To my surprise, they were very aware of what their dad was doing and were confused and frustrated.

I insisted that we go talk to his doctor and get help after Ken lost his third job in 2015, and it was at this time that I realized Kenn knew he had a problem, too. Kenn knew he could not retain any information but had no knowledge of his uncontrollable temper.

Kenn had a wonderful doctor in Regina who listened to us and referred us for further tests. In November 2015, we drove the two and a half hours from Regina to see the amazing staff at the Rural and Remote Memory Clinic in Saskatoon.  Kenn did it all: tests, scans and whatever else was requested, then we went home.

I remember the day we went back for the results like it was yesterday. We sat in silence as we received the diagnosis that Kenn had FTD. This was not to happen to us. This was an old person’s disease. Kenn was only 62 years old. Why him? These are just a few of the thoughts that ran wildly though our minds after receiving the diagnosis. But we were also relieved because now we knew what was wrong.

We told our children about the diagnosis together. They were in shock, but they had also witnessed Kenn’s father doing some of the same things he was doing. We all learned about the disease, attending workshops, clinics and support groups as a family.  We are very grateful to the Alzheimer Society for the support they have shown us, with the regular monthly meetings for Kenn and the support groups for families.

This disease has caused many changes. While some days he is quite coherent, Kenn does not always realize what he says or does. The FTD causes Kenn to have OCD, rage, paranoia and forgetfulness. When he has an idea, it’s the only thing he can think and talk about. He must follow through with it, otherwise life seems unbearable until he gets what he wants, and sometimes it is just easier to give in. It’s even very frustrating for Kenn to watch television shows where there are many characters as he doesn’t remember who some of them are or when they joined the program. He doesn’t always finish sentences because the words do not come. I’m just noticing that when he has been forgetting words, I have been finishing his sentences.

At this stage of the disease Kenn still manages to look after his own personal care. He can help around the house, do some meal preparation on a good day, though this is becoming more difficult as the disease progresses. Things that were once easy are now a challenge, like making the bed, cleaning and laundry. We don’t use to-do lists as they would be irrelevant at this point. Instead, we do one task at a time. Some days, even one is too many.  Kenn requires ten to 12 hours of sleep every night, therefore, his day only begins at 1:00 or 2:00 p.m.  This has been a huge adjustment as I learn which battles to pick.

We no longer travel. We have lost most of our friends and do very little outside the house. Life has changed the most for me as I never know who I’m coming home to: Dr. Jekyll or Mr. Hyde. But we are all learning, and I have learned to live life in the moment.

As I write this story of our lives with dementia, I have reflected on many things. Most are good things, as this is what you tend to hang on to as the person you once knew so well changes right before your eyes. One of the good things has been Khloe, the six-year-old standard poodle we were fortunate to get in June 2016. Khloe goes everywhere with Kenn. They are well known at McDonald’s and Tim Horton’s, as this is part of their daily routine.  Having Khloe in our lives has made Kenn more active as she needs exercise daily.  What a gift!  She is the best thing that has happened in our lives (other than our grandchildren) since the diagnosis.

Family support has meant so much to us throughout this journey. Our three wonderful children, their spouses and four grandchildren are just a phone call away and are there for us in a heartbeat.

Life with Frontotemporal dementia is not how we expected to live our golden years, but it is what we have been dealt and we will continue to deal with what comes our way.

My husband was diagnosed 2 years ago in December with F. L. Dementia. He began feeling very fuzzy headed in January of that year and just kept saying he didn't feel right. By August he could no longer do his own bookkeeping and asked me to take over because my writing was neater. Then in September he could no longer write numbers at all. We were blessed to go to Wascana Rehab in December for a full day of testing and received the diagnosis the same day. We came home and did lots of talking about what was to come and how we would handle it. We did our Health proxies and discussed at what point if any he would have to go into a nursing home. All the important decisions were made. Sadly he is already in that nursing home as his dementia progressed so fast. He no longer knew me or our home and he wouldn't stay in our home so it was no longer safe for him. He is settled now and doing well. 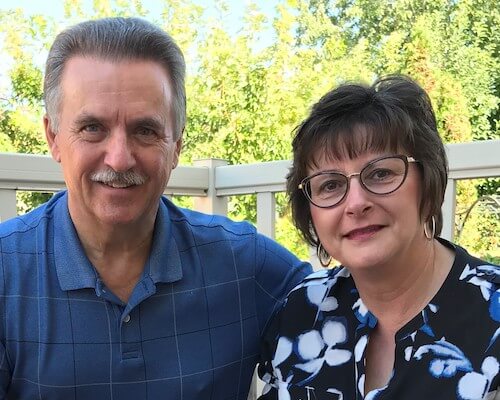