I have lived in Halifax since 1987. I worked as an accountant and consultant internationally, but my home base was Atlantic Canada.

I used to have very good memory. However, when I was 51, I started having memory problems that affected my work. I was losing my ability to concentrate, and I couldn’t remember how to get to my clients’ offices or learn new tax laws.

My doctor was very good and persistent. She knew I was struggling at work, so she kept sending me back to the memory clinic over and over again to get tested. Three years later, when I was 54, I was diagnosed with Lewy body dementia with Parkinson’s.

It was partly my fault that my diagnosis took so long – not disclosing my symptoms right away was a huge mistake. I was reluctant to tell my doctors that I was having problems with hallucinations and balance. I was sure that if they knew, I would be locked up with the key thrown away.

Before I was diagnosed, I didn’t think any of my symptoms were related to my memory loss. I was hoping it was something else. Deep down though, I knew it was going to be dementia.

Reacting to the diagnosis

Still, when I heard the diagnosis, I went into shock. I laughed at the doctors. One of my first thoughts was: “Yeah, dementia? That’s when you get old and you sit in a rocking chair and ‘they would lock the door on you, and you don’t leave – ever.”

These thoughts were the result of stigma I had formed against dementia based on an experience I had when I was 15 years old. Back then, I volunteered at the psychiatric hospital in Sydney, Nova Scotia. There were so many patients there with different mental health problems, including those living with young onset dementia and those in the latter stages of the disease.

Now that I was diagnosed, I was sure that was what was going to happen to me, too. I found myself pulling away more and more from certain parts of my life. I wasn’t interested in engaging with people or the activities I once loved.

After connecting with the supportive staff at the Alzheimer Society of Nova Scotia in Halifax, I slowly overcame my feelings of hopelessness. My daughter, Lora, enrolled us in the Society’s Shaping the Journey program. With the help of programs like that, I regained my confidence and started to socialize again, coming outside of my hermit shell.

Some of the people whom I had known for awhile didn’t know how to react. So many times I heard, “You’re too young, you can’t have dementia.” I noticed that people called and visited me less often.

But the people who are still in my life now – they understand. They get it. My family is very supportive of me. Though there were some concerns at first that my dementia was a genetic trait, they know now I’m still okay.

Considering the stories I’ve heard about how other people with dementia are treated by healthcare professionals – for example, not being listened to – I’ve been lucky. Those who I’ve consulted with have talked to me directly.

Sometimes, when my daughter is with me, they will talk to her first. If that happens, she’ll tell the doctor to ask me their questions directly. If I forget anything, she can fill them in, along with any changes she’s noticed.

I know when I’ve done something that is very busy or draining, I need a day to recuperate. Like being with my very active grandchildren. I love being with them and won’t stop seeing them.

I try to do my thinking or complete harder tasks in the morning, when I’m better able to concentrate. Late afternoons and evenings are my quiet, shutdown times. Anything told to me during these times is not likely to stay there for long. I’m less likely to get a joke or understand any innuendo.

I have a calendar that I take with me everywhere I go. That way, I can write new meetings or appointments down right away before I forget, and I won’t lose them since they’re not written down on a loose piece of paper.

I always keep a copy of the Alzheimer Society’s Memory Card with me, so when I’m having a bad day saying things properly, I can pass it to the person I’m trying to communicate with. While they read the card, I have a few moments to think about what I want to ask them or what information I need.

It’s a valuable tool to have if you’re in front of a lineup at the store, on the bus or any place that you find could be embarrassing to you, since you can pass it to the person you are trying to talk to without having to talk aloud about your situation.

I use the Internet a lot to re-learn some of the things that I used to know. And I continue to learn new things. After all, lifelong learning improves your brain and memory.

I volunteered at a library for three years, teaching ESL. Someone learned about my dementia and asked my coordinator if I was still capable in helping new immigrants learn English. They told my coordinator that, since I was losing my ability to think and talk properly because of my dementia, they couldn’t see how I was able to help others effectively.

There’s still a lot of stigma out there. That’s why I like being an advocate for the Alzheimer Society, because I can tell my story about being young and diagnosed with dementia. Being able to change the mind of a person or two at a time is important to me.

You should know that each of us are on our own unique journey with dementia. The journey does not always run smoothly. But we are defined by more than our illness.

And though we may have different types of dementia with different symptoms, we all share similarities as well. With diagnosis, we all experience change and loss, but also an opportunity to learn and gain.

If you have dementia, you need to discover and know your limitations so you too can live well. Let people know that you are still a person, and they should talk to you about any decisions that involve you – don’t be afraid to ask for help.

There are only many changing parts in the life that we are living in right now. So be kind to yourself. 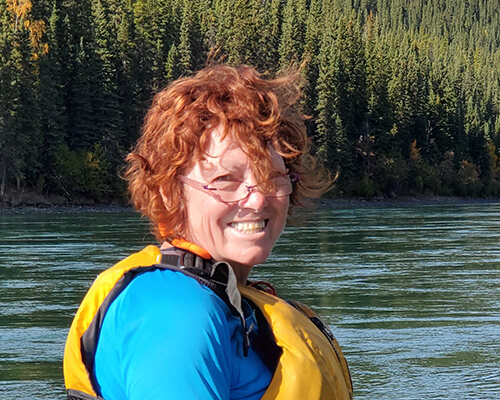