Sarah, Bill and Esther’s story is about good friends. These friends and ‘lovers of the arts’ have known each other for more than 15 years.

Sarah – who is now living with dementia – met Bill and Esther years before her diagnosis, when they all became involved in the same community choir. Sarah and Esther both sang in the choir and worked together on the production team and Bill consulted with the organization for strategic planning. They became fast friends, soon earning the nickname, “The Three Amigos.”

About seven years ago, Bill and Esther were on a trip to Thailand where they shared a large house with other adults, some of whom they knew and others they didn’t. They had such a great experience that they continued to talk about it. When they returned to Canada, they began to look for a house suitable to live in with other like-minded people. In 2014, they settled in a beautiful home in North Burnaby with two friends. Sarah was invited to move in as well, however, she wanted to continue living on her own. She came over frequently to share meals, socialize, and celebrate special occasions with her friends.

In 2016, when she realized she was having significant short-term memory issues – ultimately diagnosed as the onset of dementia – Sarah decided to move in with Bill, Esther, and their housemates. Though she initially resisted the idea, she knew she needed help to deal with her changing situation and was motivated by her deep trust and affection for both Bill and Esther. It took a short while for Sarah to get used to the idea of having other people around, but she and her cat, O’Malley, settled in comfortably.

Since being diagnosed with dementia, Sarah has found that being able to speak about her experience of the disease enhances understanding and changes how people – including her family – treat her. With Bill and Esther’s support, Sarah stays active and engaged, and continues to participate in her community by singing in two local choirs, reading stories to pre-school children, and attending movies and live theatrical, musical, dance, and social events on a regular basis. 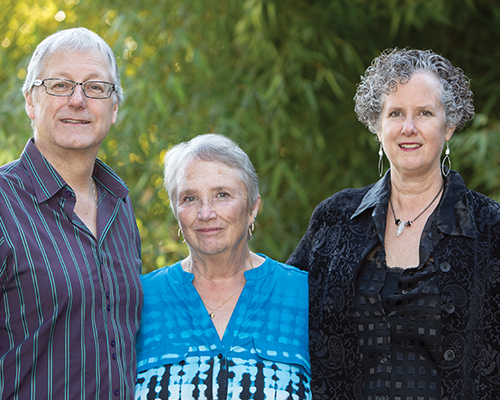 Sarah’s Tips for Dealing with Dementia: