My husband Keith was diagnosed with young onset dementia (YOD)—probable Alzheimer’s in December 2016 at 57 years old. This was following about two and a half years of seeing various specialists. At one point, he had seen about six different neurologists.

Keith and I have been together since 2004 and married in June 2016. We eloped together to New Orleans and it was a magical time. We have a blended family with six boys (all now adults) and five grandchildren. I can tell you how much I cherish my partnership with Keith. He is kind, generous, creative and hardworking. Over the past 15 years, we have been there for each other and plan to continue to do that. Keith and I are in this together.

Professionally, Keith is a business owner and has a successful business supporting adults and children with developmental and physical disabilities. He and his business partner have about 120 employees and have been in business for over 20 years. He has continued to work since his diagnosis and being open about his diagnosis with his colleagues has helped them to understand and support him so he can continue to work for as long as possible.

ON BEING A “CAREGIVER”

I find the words “caring for” or “caregiver” difficult for me to say as I do not feel I’m doing anything different now that Keith has dementia. That doesn’t mean there aren’t things I have to help him with now that are different, but I think the words don’t resonate with me. I have trouble understanding or dealing with the fact that a diagnosis now changes my role in his life from “wife and partner” to “caregiver.” We have always been there for each other and each of us has needed support at times. When I introduce myself or he introduces me, it is as his wife.

I noticed changes in Keith’s memory and behaviour about three years before he was diagnosed. I would try to talk to him about it. The changes were very subtle at first. He would express frustration about someone suggesting he had talked to them about something. I was hoping it was from something else and not dementia.

As his wife, I was heartbroken to watch him go through the process of being tested and receiving the diagnosis. I think I felt numb at first and then a bit relieved to know what it was after over two years of seeing doctors. Because I had seen the changes in him slowly over the years, even though I think I knew what they were going to tell us, I kept hoping it was something else.

The person who gave us the news was very kind and compassionate—she was the neurophysiologist who completed the testing. She warned us that reading the clinical report would be difficult. Keith was advised to go to the Memory Clinic, get his affairs in order, consider not doing the numbers or financial part of his work and plan to retire. Keith and I talked a lot about what the doctors said and how he should not make some of the changes, that he should keep working and maintaining a routine.

We received the diagnosis two weeks before Christmas and that year everyone was going to be there. We agreed to keep it to ourselves until we had time to process. I tried to encourage Keith to tell people at his own pace and that each time it might be easier.

We started telling our kids and Keith was the one who told them. We were together, but he broke the news. Each of our kids had a different reaction. They all wanted to know what help we needed (we have a great family). Keith shared that his biggest wish was not to be treated differently now that he had dementia. I noticed that the more he shared, the easier it was each time. We have six kids so it truly became easier for him to talk about it. It took Keith about two hours into the visit to tell the first one of the kids. After that, the process of telling the family became shorter and shorter. With the last one of our kids, he blurted it out within minutes of them coming over.

A few of our kids had noticed changes. The kids expressed difficulty understanding what this means for the future, as they’ve only known older people who have this disease. To be honest, people don’t know how to react to the news in general because they know from media that this likely has a negative outcome. I recall watching a recent 60 Minutes episode where they showed a husband and wife who had been living with dementia over a period of 10 years. It was an important message, but was hard to watch what they went through as her condition declined and she needed more care.

Our family is supportive and is there for us. Some family members are still very much getting used to the idea. There were tears at times and we know it’s harder for some of our kids than others. The first year after the diagnosis, we participated in the local Walk for Alzheimer’s and had a huge team (family, coworkers, friends, kids and grandkids). I’m very proud of how patient our family is. That being said, Keith finds larger gatherings difficult now, so we have likely not been as present at family events in the last few years. SOME people understand and for others, it helps to add distance, too.

We have had both a lot of support and then distance from some. Your circle becomes smaller, but for many reasons. Most people say they don’t understand how this will play out for a person who is younger, or often mention they had a grandparent with Alzheimer’s. Some have questioned why he still drives or how long he’ll be able to work. To be honest, most people don’t know how to react, or they can’t see the changes that he feels or see what I see. People seem to want to minimize the symptoms or to normalize them. I see family and friends feeling uncomfortable when Keith describes what he has trouble with or how he feels about things. People’s first reaction is usually shock or to feel sorry for him and us. We both find ourselves saying, “It’s okay.”

Keith and I recently got tattoos of Dory the fish from the movie Finding Nemo who lives with memory issues. We did this so that when people talk to us about our tattoo, we can educate them that people can live with dementia. Telling people about it helps bring awareness to reduce the stigma.

This was the hardest part for me as his wife. Overall, I would say at times it felt like our concerns were dismissed because of his age or his capability. Keith and I are both very independent in many ways, even though we are very much partners in life. He had always gone to medical appointments alone in the past. When he had something in June 2014 that looked like a stroke, I began going with him (which he didn’t really want me to do). I tried talking to him prior to appointments, asking him to consider sharing with the doctor that he noticed he was having difficulty with his memory or processing information. He was adamant that this not be shared at the appointment.

In September we had the first specialist appointment with a neurologist. I spoke up and expressed concerns. The doctor immediately dismissed my comments and said, “this is normal aging.” Keith was not pleased that I had done that either. At that time, Keith was put on a medication to help with the migraines with aura he was having that were known to make memory issues worse. We followed this track for another year and then they needed to rule out that the events he was having were not seizures.

I worked up enough nerve to try again with a new neurologist he was referred to in September 2016. Keith asked me not to, even as we were in the waiting room. When the doctor asked me what I noticed, I mentioned that Keith often talked about concerns with his memory and processing information. This doctor then asked Keith if what I was saying was what he was experiencing. Keith agreed this was the case and the doctor referred us to a neuropsychologist.

I think because Keith appears very capable to others (and he is) they often don’t notice the changes in him. It feels like medical professionals are very resistant to provide this diagnosis. I understand why, but we need to be better at this. I know it’s hard to tell someone this news and the process right now is to rule out all other things. I remember at one doctor’s appointment, Keith told the doctor that they had to find a better way to diagnose dementia.

The first sign of stigma was at the doctor’s office. People will often ask me if I still “let him drive” or, “Is he really a good driver?” This is the thing I think I notice most and the thing that others are uncomfortable about. He’s happy to tell them that he’s likely a better driver than I am. The notion that we must immediately change and stop everything is an old one and relates to the stigma. Keith is a good driver, but he has made changes to the way he drives following his diagnosis. He doesn’t drive if he is tired and he only drives to more common places. He also changed from a large truck to a smaller vehicle.

We have some of our own stigma too. Keith and I can be cautious about who we tell in case we think they will not be supportive, or if it will affect his independence. We’re still learning how to educate people on how we “live well with Alzheimer’s.”

Mostly I notice people feel sorry for him and I, like there is no way that we can still be enjoying things in life. Sure, some things are different and we are scared or cautious of what the future may hold, but we try to just enjoy things as we can.

Travel at airports has been challenging and certainly they are not set up for supporting people who cannot rush through instructions or lines. I have seen my husband be yelled at and saw him resort to yelling because of being rushed.

I think that it’s not just dementia, but any potential need that someone may have that should be accommodated. Businesses, retailers, doctors, emergency rooms, hospitals and the general public should be taught how to be more sensitive or dementia-friendly. Training needs to happen in all areas of health care. Everyone needs to consider paying attention to cues. Slow down, be more patient.

I don’t think people with dementia should have to wear a name tag, although I know some do. Businesses should just be dementia-friendly.

We need to share more stories about how people with dementia are living or working in our communities.

We need more education on the benefits of having people with dementia at work and volunteering.

Robin, This was so well said, thank-you! 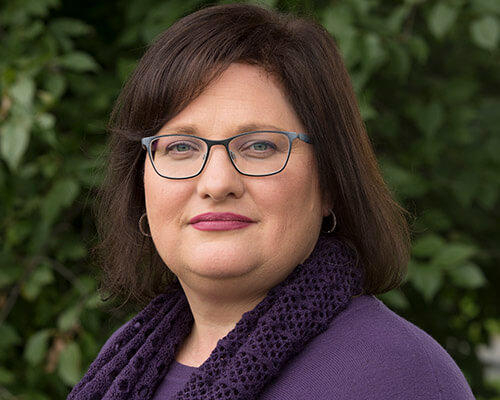