I am sole power of attorney for my mother living with dementia, whom I also care for. She will be 90 years old this year. She and I were given the “official diagnosis” at the Ontario Shores Centre in September 2013, when she was 83.

My mother was born in England, married my father who was from Ireland, and together they had three children. They emigrated to Canada where we had no family whatsoever. She was a very active, fun-filled individual who loved people and loved life. She had lived on her own since she was 50 years old, when my father died totally unexpectedly from a massive heart attack. He was 54.

She was of the British ‘suck it up’ stock, very independent, never asked anything of her family. She lived her life and encouraged us to live ours. However, as a result of her living by herself, her memory issues were hidden. They must have been ongoing for some time, but since I didn’t live with her – I lived an hour away and travelled a lot on business – seeing her once a week when I was at home meant I didn’t notice. And she was a very good actress.

Eventually I realized her apartment was becoming less tidy and more crowded with “junk.” She kept complaining her phone didn’t work, but then I would discover it unplugged. The same happened with the TV. Her neighbours in the apartment said she’d go out walking, then come back, then go out right away, not remembering she’d been out. I tried addressing the issue with her, but her response was always, “When you get to my age, you’ll forget things as well.”

My mother used to go to England twice a year to visit her sister. On her last visit, I went with her as I was concerned. That’s when I realized how serious things were. She couldn’t pack properly and didn’t remember where we were going. We visited relatives one day and the next day she said that we should visit them before we leave.

Mum didn’t have a doctor. She hadn’t seen a doctor in about 25 years! Luckily, my husband’s doctor agreed to see her. This began the long road of discovery of getting her checked out – an MRI, a neurolite brain scan, etc., then testing at Ontario Shores. We were very fortunate that this doctor took things seriously and didn’t just brush us off, as I’ve heard has been the issue in too many cases.

By this time, we were given the diagnosis, I knew what we would hear, so I wasn’t shocked. But, once you actually “hear” the diagnosis verbalized, it becomes real, and you have to deal with it in a “real” way.

It was more of the same. My mother was in denial: “You’ll forget things when you get older.” She fought me every step of the way. She never did accept the diagnosis and I’m sure if today she could remember she’d still deny it!

There was one part of the diagnosis that I’m eternally grateful for. When the team gave us the diagnosis and explained what it meant, Dr. Doell said, “There’s a representative from the Alzheimer Society of Durham Region here, would you like to talk to her?”

I absolutely did, and, I have to say that it was my saving grace. Michelle was so calm and kind and explained more about the disease and the services that the Society offered. Taking the courses from the outset taught me what the various stages were and how to deal with my mother in a gentle and reassuring way.

My mother’s neighbours in her apartment building were so very caring of her. They watched her when she went out for a walk, “fixed” her phone when it didn’t work, and got her mail before she did so that I could check and pay her bills. After my mother was diagnosed and I had let them know what the issue was, they said they already guessed that she was in the beginning stage of Alzheimer’s. Her neighbours watched and cared for her until I could get her living arrangements looked after. To this day, they call and ask how she is.

Regarding stigma, I can’t actually say Mum has faced a lot of it. Because she was so outgoing and friendly, she got away with a lot that most people wouldn’t have. She loves to dance – as soon as she hears music, she’s up. In that way, she makes people smile.

She always said, “I don’t care if they’re laughing at me, at least they’re laughing”. Sometimes if she acted a little “silly”, I had a card that the Alzheimer Society gave to me that said, “This person has Alzheimer’s”. People would smile and let her keep dancing or do whatever she was doing. 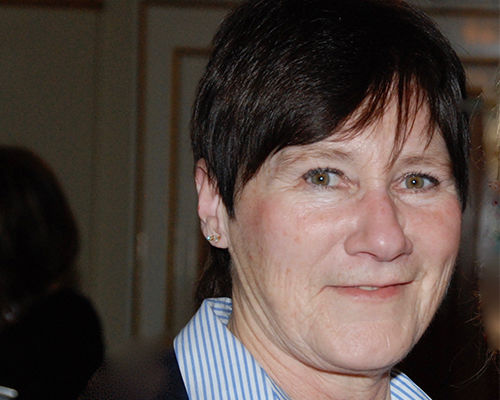